Symposium – Celebrating 50 years of our faunal emblems being proclaimed.

On 16 October we hosted our FREE Symposium, where we shared the challenges and successes of threatened species conservation as it relates to our Victorian faunal emblems.

An exciting opportunity exists for an enthusiastic, experienced volunteer to fulfil the role of Treasurer with the Friends of the Helmeted Honeyeater Inc. (FOHH). The FOHH is a vibrant and expanding not-for-profit organisation and currently requires a competent Treasurer to oversee its financial administration. The Treasurer is a member of the Executive of the organisation.

The role requires book-keeping or accounting experience given the complex needs of the organisation. This includes financial obligations in relation to GST, employee wages, a growing wholesale and retail plant nursery, changing governance issues, Deductible Gift Recipient (DGR) status and the administration of grants.

To assist the Treasurer with the financial record-keeping and BAS lodgement, the Committee of Management has engaged the services of a bookkeeper.

To find out more:

This is an opportunity to become a part of a friendly, positive team that would benefit from your business acumen and finance skills.

We are looking for someone who:

The Facilitator will provide extensive support to the landholders already engaged through the Beyond Yellingbo Project and engage further landholders in conservation action. In 2021 we celebrate the 50th anniversary of our State bird emblem, the Helmeted Honeyeater and State mammal emblem, the Leadbeater’s Possum being proclaimed. Both are Critically Endangered.

The Friends of the Helmeted Honeyeater and the Friends of Leadbeater’s Possum are running a whole year program of events to help celebrate a message of hope for our treasured native species. See pages 3 & 4 of the Autumn edition of the HeHo Herald for information about the events we are holding this year. Some events are members only, and others are open to the public.

Once common in Victoria, around the Yarra Yalley and south down to the Bass River, Helmeted Honeyeaters are now only found in a single location in Yellingbo, about 50 minutes from Melbourne’s CBD. A decade ago, it was estimated there were only 50 Helmeted Honeyeaters in the wild. Thanks to the efforts of the Friends of Helmeted Honeyeater volunteers and a multi-agency recovery team, today there are around 250 birds in three separate colonies.

The species is Critically Endangered and the small lowland colony at Yellingbo is under especially severe pressure. Unfortunately, efforts to breed the possum in captivity have so far been unsuccessful and a trial translocation was abandoned due to cat predation. We must continue our efforts as a volunteer community group to do all we can to protect our unique species in the forests where they live.

We are calling for passionate artists to donate work for an art exhibition celebrating our State Faunal Emblems. The exhibition will run from 16 October to 14 November 2021 and will be held at Burrinja Gallery in Upwey.

We are asking wildlife artists to join us by donating their work to this exhibition. 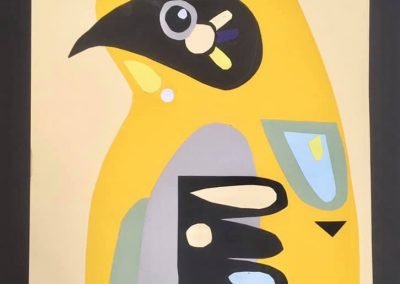 18th April 2021: Rory Ellis and Jack O’Connor have put their design and artwork talents (respectively) to work, partnering with the Friends to produce some new merchandise profiling our favourite bird, the Helmeted Honeyeater.
See the range in our shop here.